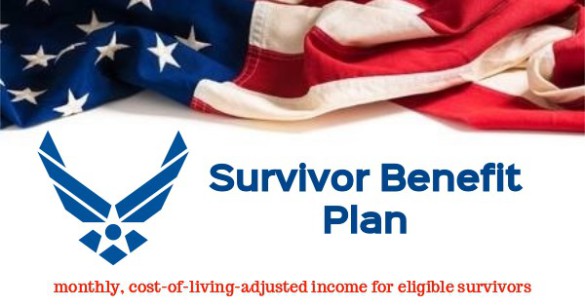 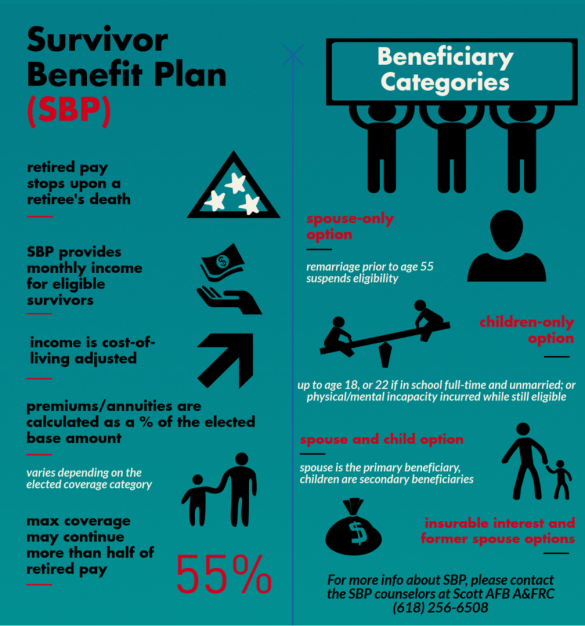 While you are on active duty, if you have a spouse and/or dependent children, they are automatically covered by the Survivor Benefit Plan (SBP) at the highest level at no cost to you. Prior to your retirement date, you must decide whether you want to continue SBP coverage into retirement. If you elect SBP coverage, you must pay premiums once you retire. SBP premiums are collected by reducing your retired pay, and they are not counted in your taxable income. This means less tax and less out-of-pocket cost for SBP. Also, the overall Plan is funded by the Government (subsidized), so the average premiums are well below cost.

If you elect spouse coverage, you’re covering the spouse you’re married to at the time of your death. Upon your death, benefits will be payable for the lifetime of your spouse and are not interrupted if he/she remarries after age 55. They are, however, suspended upon remarriage before age 55, and resume if that remarriage ends by death or divorce.

The SBP annuity payable to your spouse is 55 percent of the base amount you elect. If your spouse dies, if you divorce, or if you remarry, you must promptly notify the Defense Finance and Accounting Service (DFAS). This ensures SBP premiums are properly suspended or resumed. Otherwise you may end up owing a large debt for unpaid premiums.

Instructions for a member unmarried at retirement:

If you do not have a spouse on your date of retirement and later marry, you may elect SBP coverage for the new spouse. In order to establish the coverage, you must notify DFAS in writing before your first wedding anniversary. The new spouse becomes an eligible beneficiary on the first anniversary of the marriage or upon the birth of a child of the marriage if before the first anniversary. You do not pay premiums until the new spouse becomes an eligible beneficiary.

A member, who has a former spouse, may elect to provide SBP coverage for that former spouse upon retiring. An election for former spouse prevents payment of an annuity to a spouse. This option may be elected by a retiring member either voluntarily or mandated by a divorce agreement. The SBP annuity payable to a covered former spouse is 55 percent of the selected base amount.

A spouse loses eligibility as a “spouse” beneficiary following divorce. If you wish to continue to cover your now former spouse either voluntarily or as a requirement in a divorce agreement, you must convert your SBP election from spouse to former spouse coverage within one year of the date of the divorce. To convert spouse coverage to former spouse coverage, you must submit a properly completed DD Form 2656-1, SBP Election Statement for Former Spouse Coverage, to DFAS along with a copy of the divorce decree to include the settlement agreement. If DFAS is not notified within the first year of divorce, the former spouse is not eligible for annuity payments even if you continue to pay SBP premiums.

You may elect coverage only for your eligible children (Child Only Coverage) or you may include them with spouse/former spouse coverage (Spouse and Child Coverage or Former Spouse and Child Coverage). There is only one annuity. In the later options, eligible children are paid the annuity only if your spouse/former spouse dies or remarries before age 55.

Children are eligible for the annuity only during the time they are unmarried and:

Eligible children may include adopted children, stepchildren, foster children, grandchildren, and recognized natural children who live with you in a regular parent-child relationship. To qualify as a dependent child, a grandchild must be in your care and custody by court order and meet dependency requirements. To qualify as a dependent child, a foster child must receive over one-half support from you and such support must not have been provided under a social agency contract.

If you’re not married and have no dependent children, you may be able to elect coverage for an “insurable interest” person. This must be a natural person (not a company, organization, fraternity, etc.) with a financial interest in your life. It can be a close relative or a business partner. If the person is related closer than a cousin, proof of insurability is not required. If you are not married and have only one dependent child, you may elect insurable interest coverage for that child. An insurable interest annuity is paid for the lifetime of the beneficiary.

You are authorized a one-year window between your second and third anniversary of receiving retired pay in which you can disenroll from SBP. That allows members who may have a financial crisis or simply decide they no longer need the SBP protection for their survivors, to permanently get out of the Plan. This requires the concurrence of the spouse, there is no refund of premiums, and you will be forever barred for reentering. Once the window closes, the election becomes basically irrevocable.

Public Law 105-261 was signed into law 17 Oct 98. It stipulates that effective 1 Oct 2008, retired members age 70 or older who have paid into SBP for at least 30 years (360 full payments) will be considered “Fully Paid-Up”. No further premiums will be deducted from their retired pay, but their eligible beneficiary will still receive an SBP annuity when they die.

Prior to your retirement date, AF retiring members are required to attend a personal one-on-one SBP briefing with an AF SBP counselor. If you are married, your spouse should also attend the briefing. The law requires both you and your spouse to be fully informed of the options and effects of the SBP so that you can make an informed decision and so that your spouse will understand the implications of your decision.

Do not depart on PCS or terminal leave until you have received your one-on-one SBP briefing and completed a DD Form 2656. If you are married, you may not elect reduced spouse coverage or to decline spouse coverage without your spouse’s written consent on the DD Form 2656 after you make the election. The election can be changed at any time prior to your retirement date if you change your mind. If you do not complete a DD Form 2656 with a valid SBP election prior to your retirement date, DFAS will establish full automatic spouse and child SBP coverage.

For more information about SBP, please contact the SBP counselors at Scott AFB Military & Family Readiness Center or by calling (618) 256-6508.

This site is a public service by the Scott AFB, Military & Family Readiness Center.

The presence of commercial and external hyperlinks doesn't constitute endorsement by the M&FRC, Scott AFB, AMC, the USAF, or the Department of Defense (DoD), of the external web site, or the information, products or services contained therein.